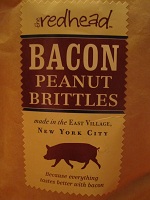 Year of the rabbit?  Doubt it…I declare this the Year of the Pig, and actually the “Year of the Belly of the Pig.”  What’s the deal?  All things “porcine” rule at the moment.

Spotted Pig in New York’s Greenwich Village, takes no reservations, but that does not deter loads of people from waiting hours for a chance at some tasty pork treats.  The food at this gastro pub is fabulous, and they have a Michelin star to prove it.  Start your meal nibbling on Crispy Pig’s Ear.  OK, it really gets stuck in your teeth, and makes me think of the pig ears I buy for my lab, Charlie – but try it.  One night there we had crispy pig skin with smoked paprika to munch on while we perused the menu.  That experience was sort of like eating bacon flavoured rice cakes…odd, yet yummy and, well…fun.  The crispy pork belly is decadent – the skin so crisp and salty, the next layer essentially pure fat, and then tender, succulent meat. After all, what wouldn’t be tender living so close to all that pork fattiness? At least I think it was meat – is it possible I was high on pork fat?  Check out this article featuring SP’s chef April Bloomfield – it’s her handy guide on what to do with every part of the beloved pig, in case you were in a conundrum about the best way to prepare pig’s tail, for example. http://nymag.com/restaurants/features/70097/

As popular as pork is right now, it’s bacon’s star that is really shining (it’s the grease) these days – maybe because it has ventured past breakfast and burgers into the arena of the newly fashionable sweet and salty snacks.  Perhaps  we can credit Heston Blumenthal – the molecular gastronomy genius from the Fat Duck in the UK for starting the craze back in 2006 when he served Smoked Bacon and Egg ice Cream.  However it started, sweet bacon treats are here – get ‘em while they are hot.

A couple of years ago I picked up a Vosges Haut-Chocolat bar that caught my eye while in NYC.  Mo’s Milk Chocolate Bacon Bar:  Applewood Smoked Bacon, Applewood Smoked Salt and Deep Milk Chocolate.  I mostly grabbed it on a lark, for a friend obsessed with bacon.  But it was good.  Like really good.  Wishin’ I’d picked up a few bars good.  http://www.vosgeschocolate.com/

Bacon Jam.  Yup.  You read correctly.  There’s a company in Seattle making “jam” from bacon.  Apparently it is “reduced” bacon, with onions and balsamic….I don’t know about you, but I just asked a friend in Seattle to mail me some – post-haste.  I think I will keep it in the car in case I am ever out and about and need a quick bacon hit….you never know.  http://skilletstreetfood.com/baconjam.htm

Bacon Palmiers.  Bacon Churros.  Bacon Brownies.  Bacon Toothpicks. Bacon Gum…..I could go on and on.  I have been told there’s a restaurant in Waterloo, Ontario that will add bacon to any menu item for free…simply because they support your decision. That’s bacon love right there.  http://www.uptown21.ca/Home/index.html

Bacon is the new black.  It’s everywhere, and it goes with everything.  You can’t have a menu without it.  Go ahead, indulge – it suits you.