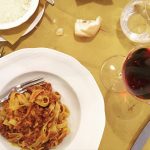 The case for Bologna

In the summer of 1989, Cam and I toured around Europe on a Eurail pass – backpacks, limited budget and not a care in the world. No specific agenda, we’d often get on trains fairly certain of the general direction but not certain of where we’d get off.  When we first got to Italy, we were very confused as the sign on the platform at every station said “Uscita” and for the life of us we couldn’t find a town by that name in our weathered copy of Let’s Go, so we just stayed on the train.  After about 4 stops like this some Italians helped us out.  “Uscita” means exit…..and that’s pretty much how we missed getting off the train in Bologna.  It’s amazing we actually even made it back home alive. 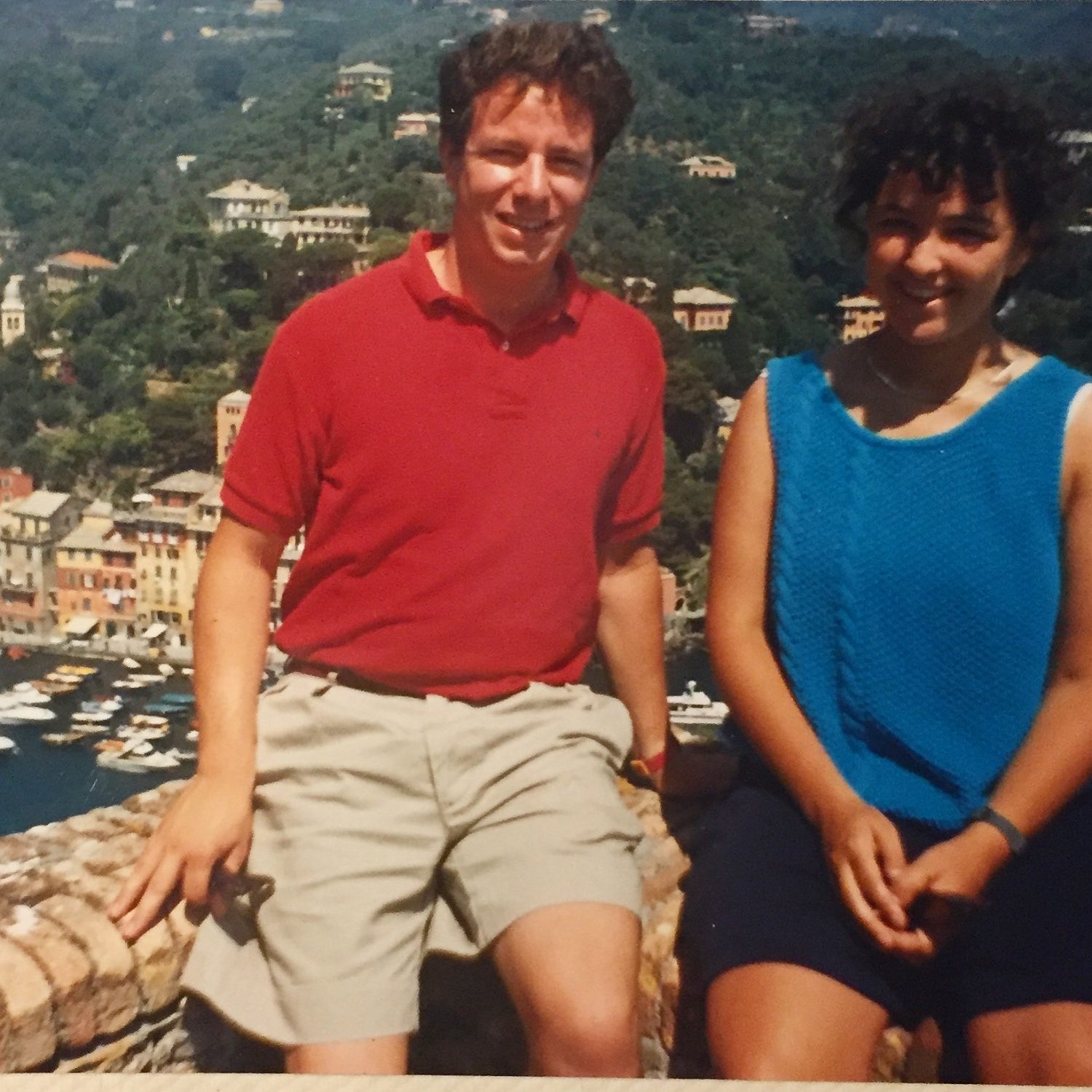 At the time I really didn’t feel like we had missed anything.  Neither of us had a particular affinity to sliced luncheon meat and from the train the city looked grey and industrial.  Plus, we weren’t hungry so we stayed on until Florence.  Fast forward a ‘few‘ years, and the glib missing of Bologna started to irk me more and more.  Didn’t my 19-year-old self want to try mortadella?  Tortellini en brodo?  Tagliatelle Bolognese? My slightly older self certainly did – and so last year I tacked on a few days in Bologna before a work assignment to check it out.  I fully expected a couple of days of research, then check this one off the bucket list, and move on. 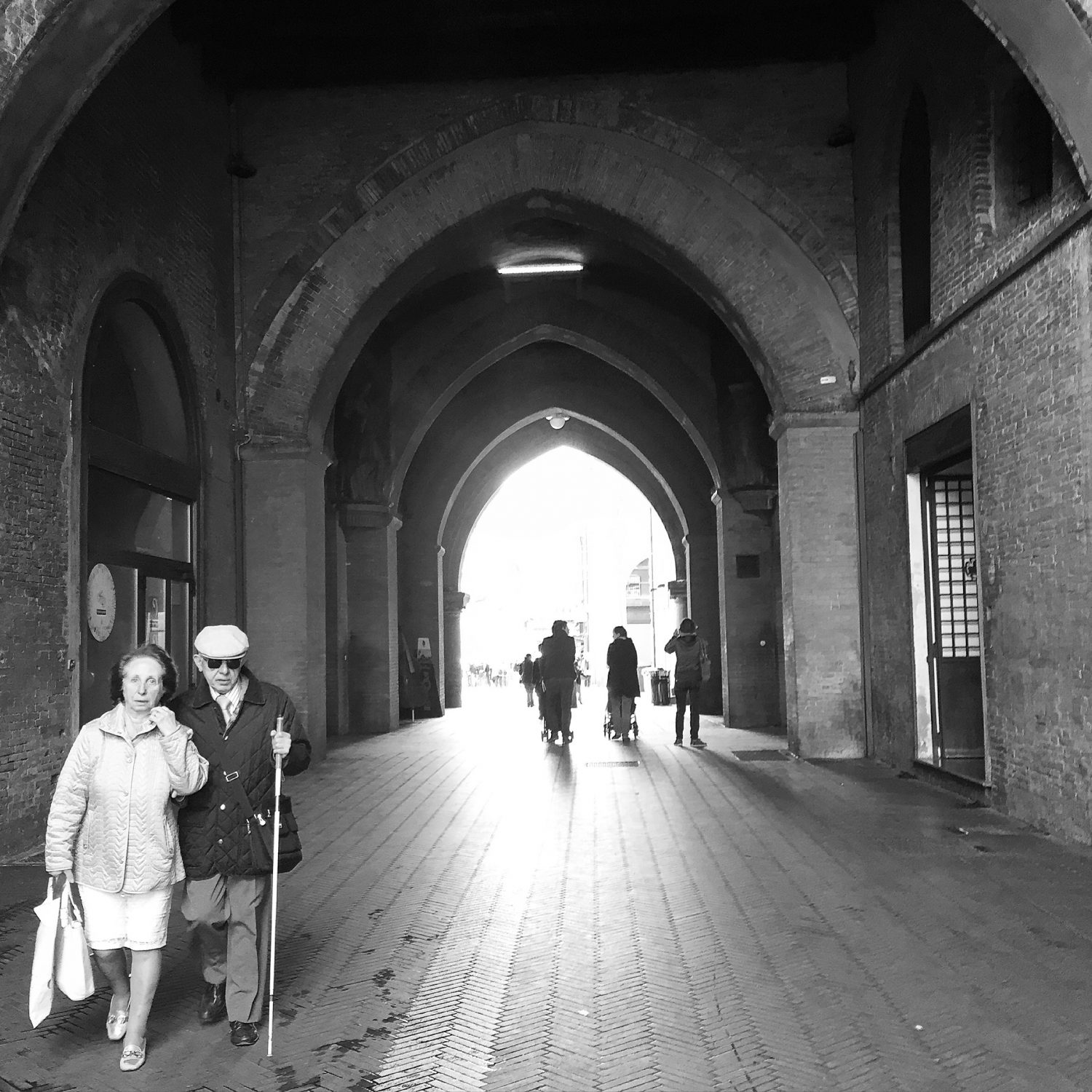 But the truth is Bologna haunts me.  I crave the food of this city continually – and returned again – my willing and hungry pal Didi in tow – not 6 even months later.  I’m currently trying to figure out how to get there again this year.

Lots of friends are in the throes of planning summer holidays and are asking me about Rome (which is a whole other delicious story) and Florence (which I have yet to “research” – ie eat my way through).  Like my 19-year-old self, people often turn up their noses at Bologna, so here’s my case for this often overlooked city.

Mortadella – let’s start with that bologna – shall we?  Is there anything better than Mortadella?  Ever so thinly sliced, lovely gobs of pork fat shining through…sometimes pistachio….

Pigo (Mortadelleria) – try to get a sandwich and a glass of wine at this closet sized place open at seemingly random hours.  Seating for about 8 inside and loads of room outside for hanging about – the formula is simple – Mortadella panino – no condiments – just bread and Mortadella sliced to order and your choice of wine – Vino Bianco Gasato Buono (Good), and Vino Bianco Gasato Buono Buono (Very good).  I’m assuming you get the same wine no matter which you order – it’s probably simply a matter of whether you prefer to pay more or less for your wine.  This, by the way, is my new retirement plan. 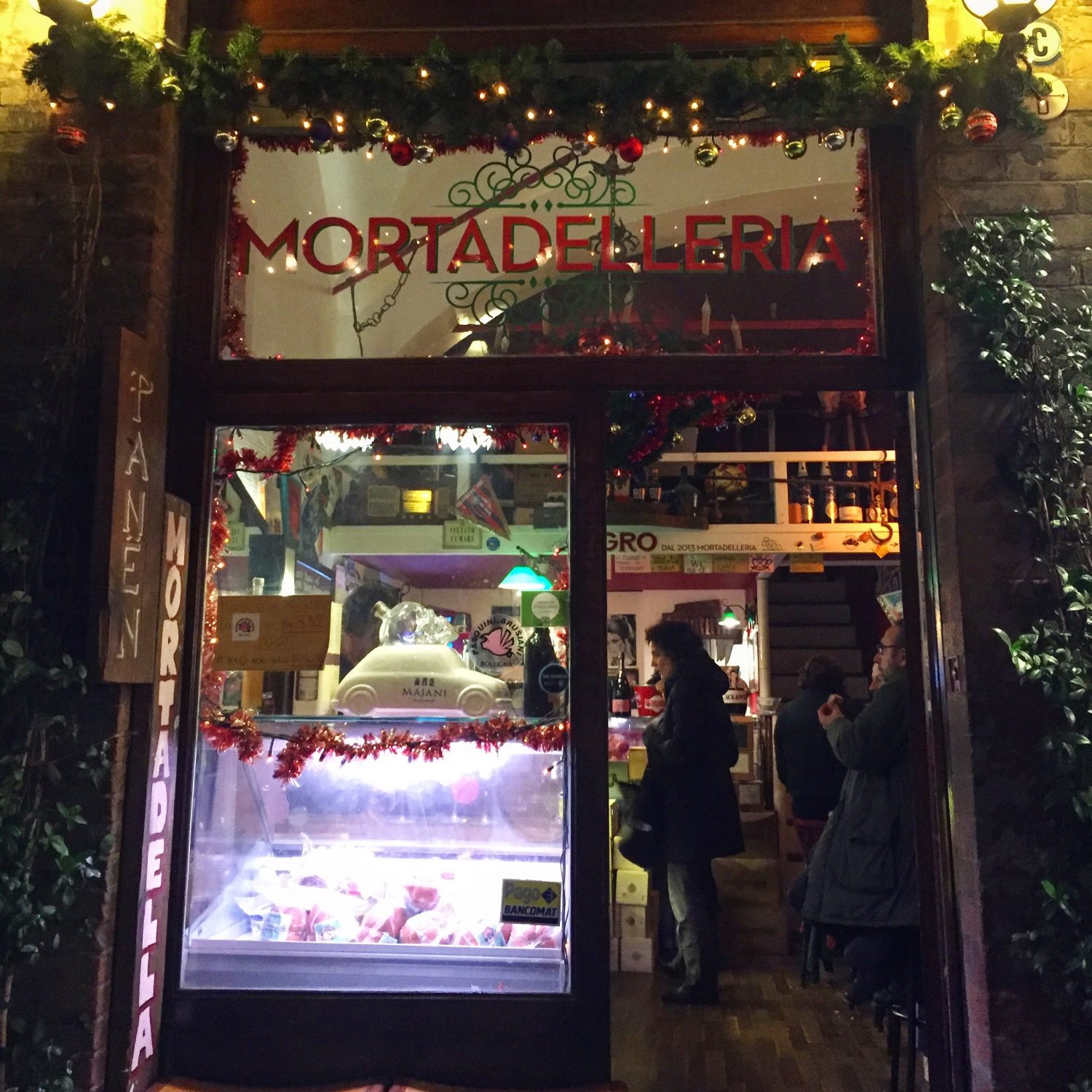 ArtigianQuality – My pal Davide took me to visit this family of producers of organic Mortadella.  I got to watch them make their amazing black truffle version using a recipe that dates back to 1557 – all pork meat mixed with mace, nutmeg, black and white pepper and cardamom (to help digestion!) minced until fine and then mixed with fat from the neck of the pig – all stuffed into a swine’s bladder.  You can visit their tiny exquisite shop and try their artisan Mortadella in town: 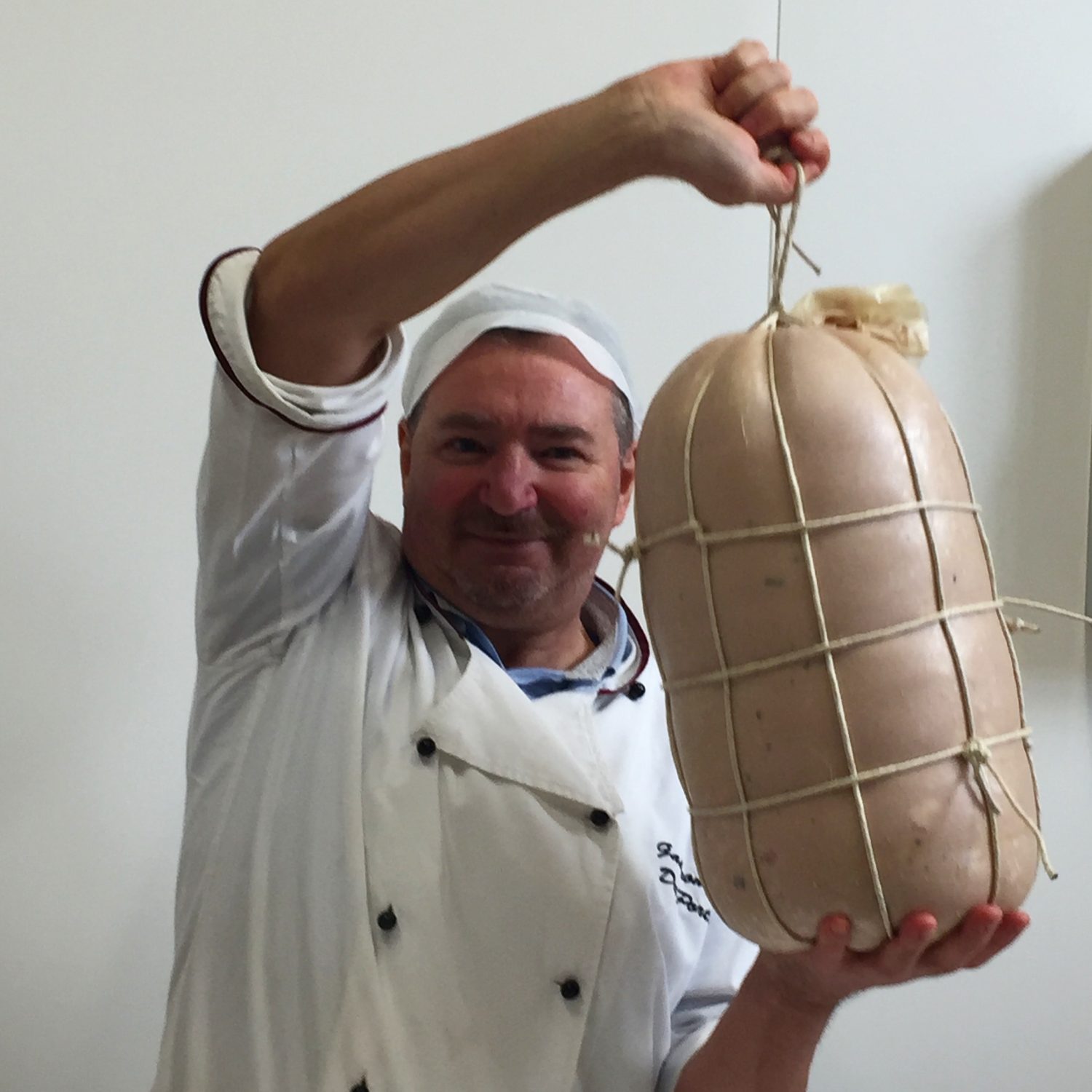 Quadrilatero – a central bustling medieval neighborhood bordered by Piazza Maggiore/Via Castiglione and Via Clavature/Via Degli Orefici.  You’ll find a treasure trove of food shops, market stalls, restaurants and bars – many that have been in business forever. I love the old pasta makers like Paolo Atti & Figli founded in 1868 and still making beautiful fresh tiny stuffed tortellini.  They’ll pack up your purchase into a beautiful box and wrap it in crisp paper just like they have for over 100 years. 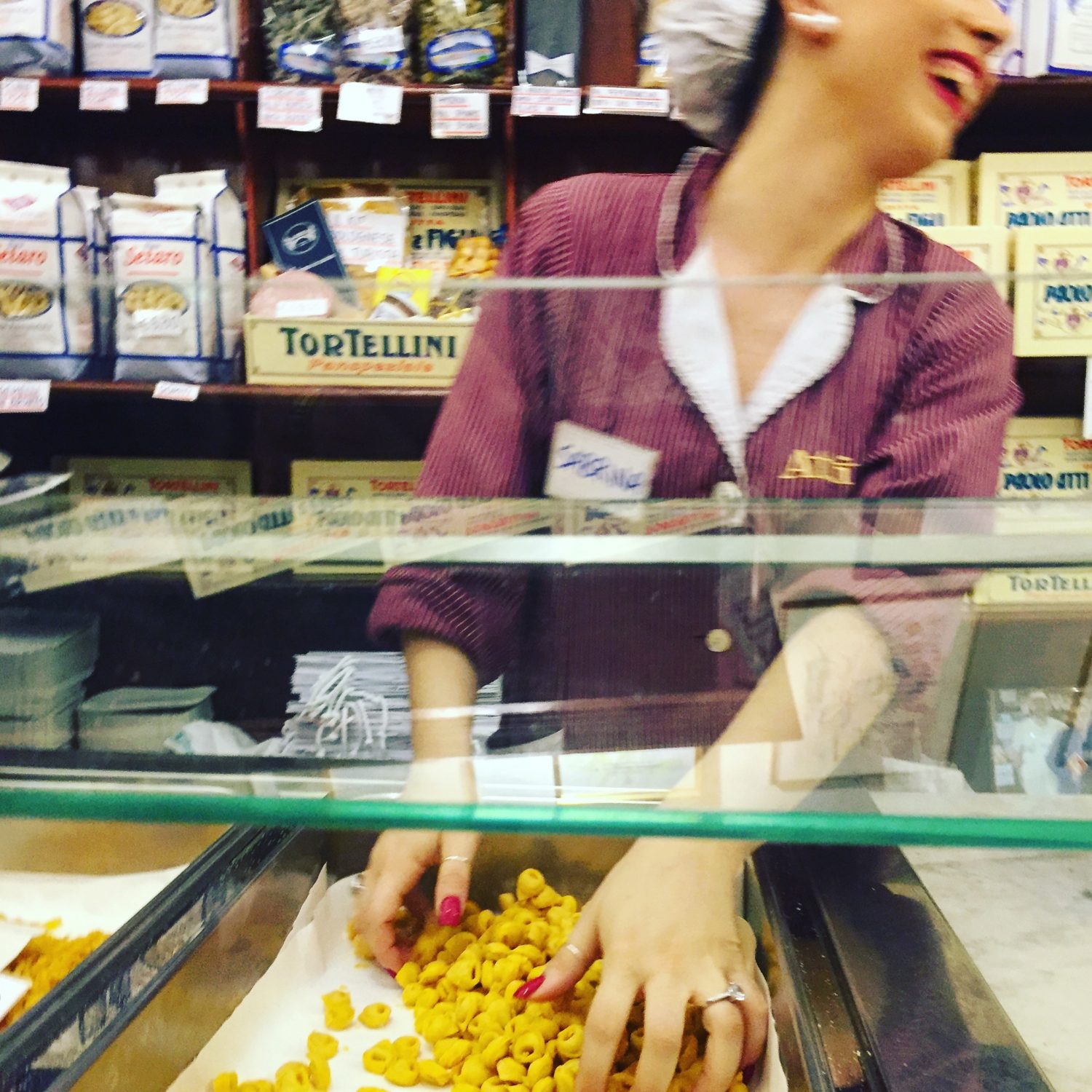 Café Pasticceria Gamberini – In the morning the place is packed with people having a quick cappuccino and brioche on their way to work.  In the afternoon folks linger over coffee and gorgeous pastries or perhaps a glass of Prosecco.  In the evening this is a great place to grab a cocktail and a snack.  The window displays of pastries and cakes are worth a detour all their own.

Drinks – or rather snacks with drinks.  Like most places in Italy, when you order a cocktail you’re also brought some sort of little “snackage” – perhaps some chips or olives…..but in Bologna the snacks are next level.  A little polenta topped with Bolognese sauce?  Or perhaps a tiny Tigella (bread made with pork lard) stuffed with Mortadella?  Drink-snacks in this town encourage a strong showing for Aperol-Spritz-O’Clock. 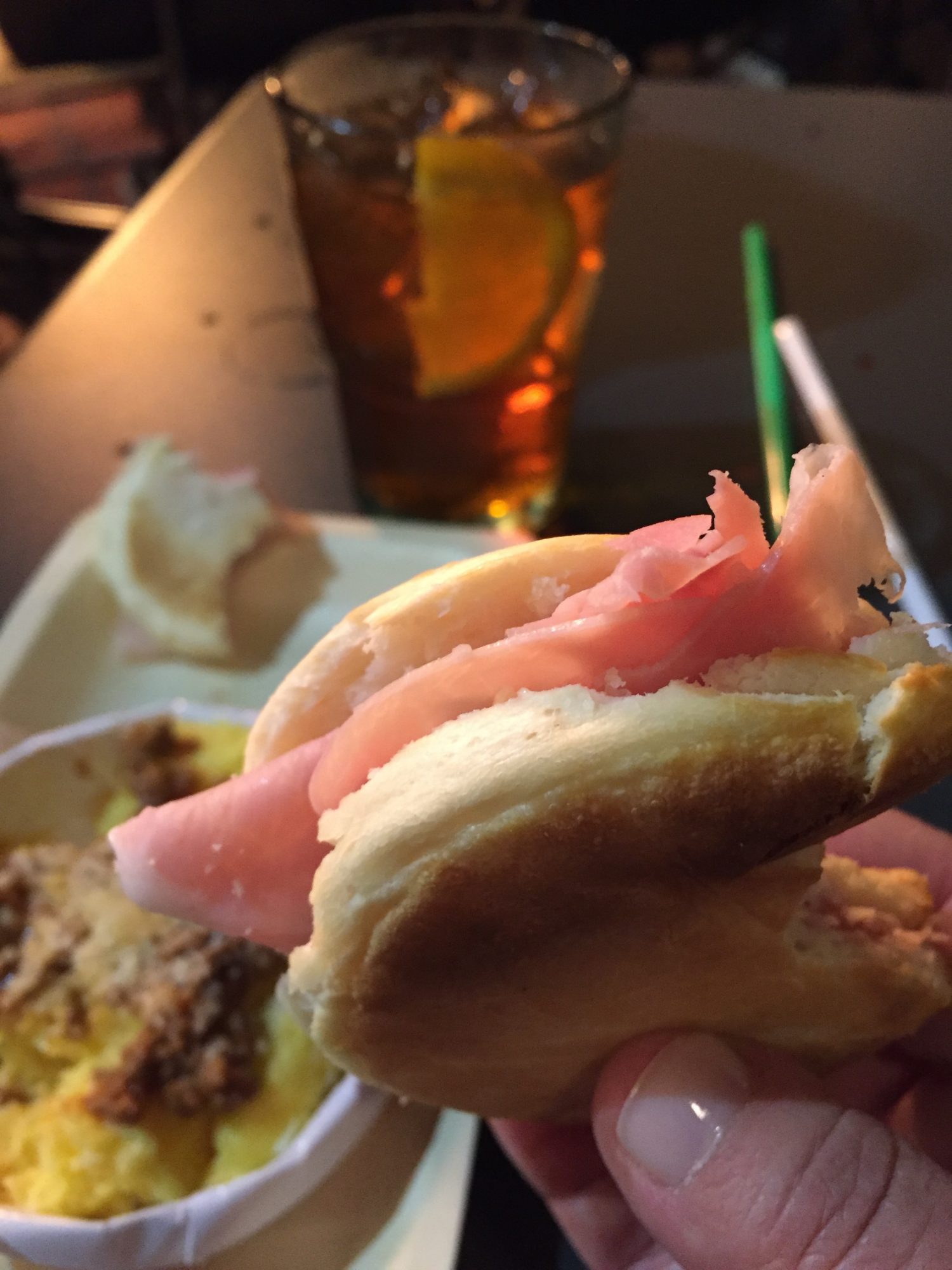 Crescentina (gnocco fritti) – they look like extra-large golden brown ravioli but are a simple bread.  Cut and fried until pillowy, they are best eaten warm and stuffed with mortadella and fresh cheese.  Yes.  Always yes.  Davide picked me up from the airport in November and we went directly here to feast on crescentina and mortadella – a perfect meal after an overnight flight – or actually any day, any time. 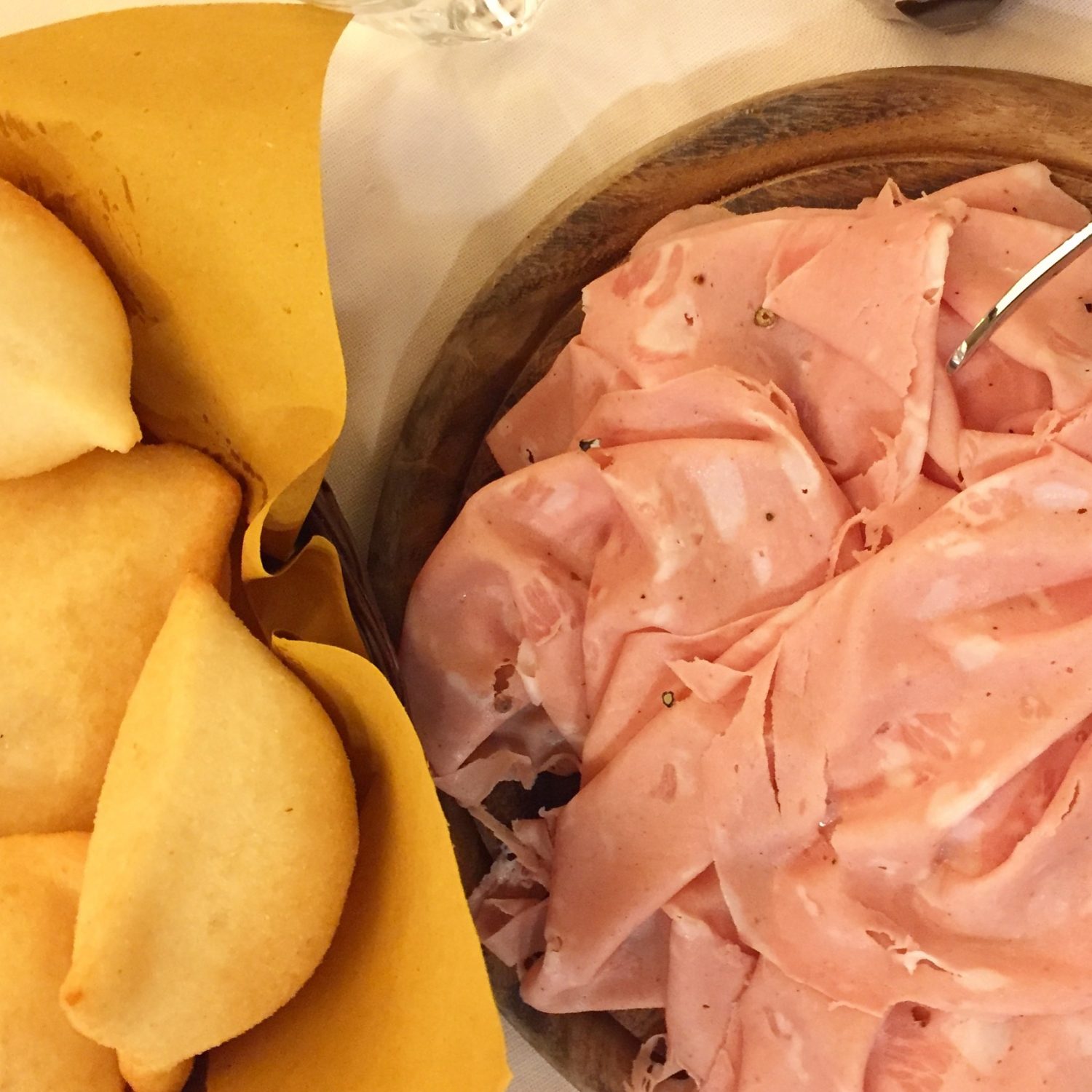 Tortellini en Brodo – teeny tiny handmade tortellini stuffed with prosciutto crudo, Mortadella and Parmigiano Reggiano…bathing in a clear flavor packed broth which you then top with more Parmigiano – can be found at most places in the city.  I wasn’t super excited about this dish – but it really is compulsory eating – and once I’d had my first taste I was in love.  My favourite version was at a little unassuming spot close to the train station.  My friend Antonio strongly suggested a stop here – I don’t think they see many tourists – but we were welcomed by gregarious host Max with open arms like long lost friends.  Our Sunday lunch was “stellari” as Antonio had promised – and the tortellini en brodo so magical, it was almost unbearable. 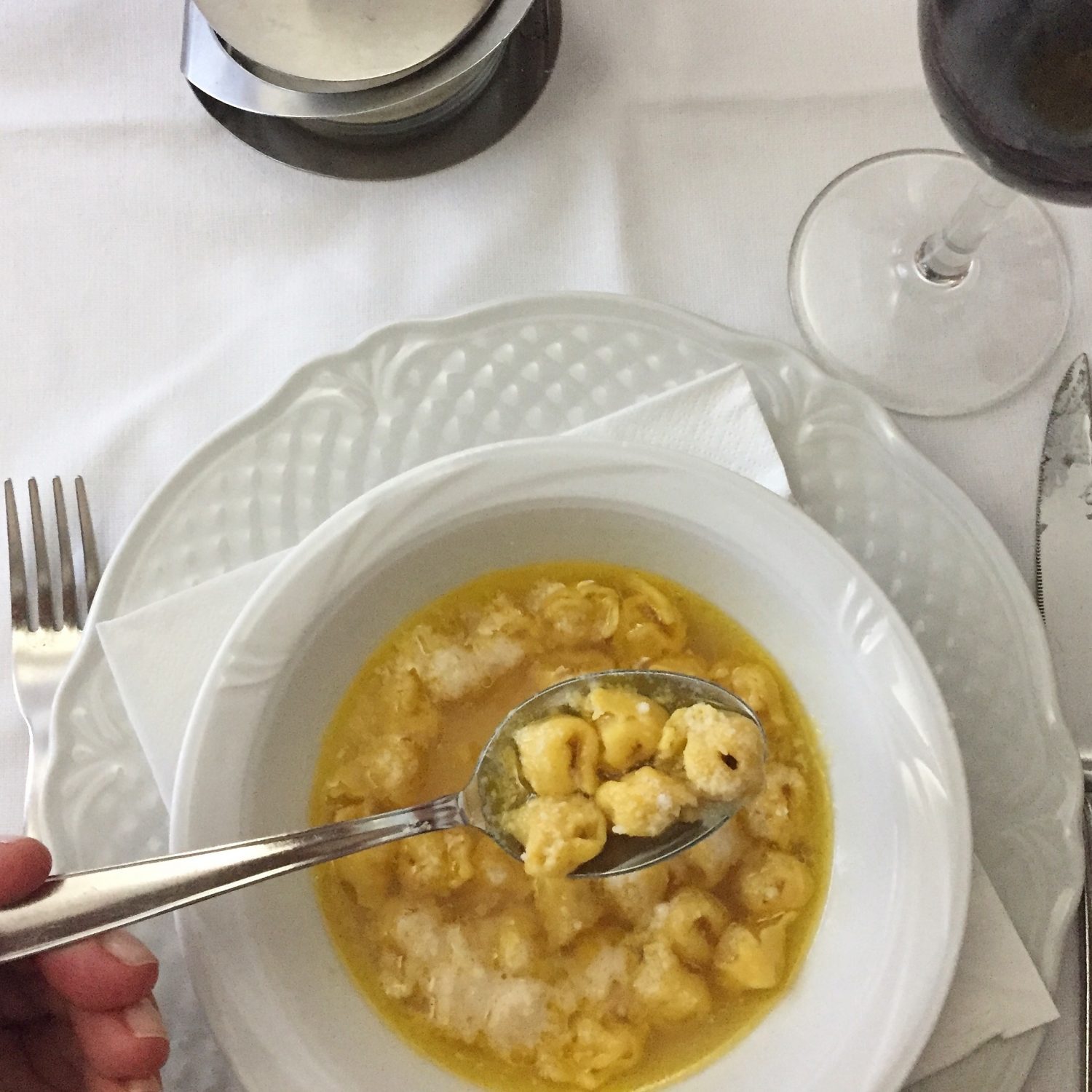 How are you feeling about Bologna now – huh?

Bolognese – as if all this weren’t enough tough, the main event in Bologna is, well, of course Bolognese.  The original and true Bolognese is quite different to what we prepare in North America.  There is very little tomato, no garlic and it is traditionally served with fresh tagliatelle – never dry pasta like spaghetti. This is such a simple dish – but so rich and complex and completely unforgettable.  The ragu is typically started with chopped pancetta, carrot, onion and celery sautéed in butter, to which almost equal parts chopped beef and pork or just pork is added.  I was told by several that the chopping of the meat is key – small pieces – but not too small – preferably cut by hand – not machine ground.  A little tomato paste, some milk and rich beef stock is added before a long simmer to yield a thick and hearty ragu.  Often a small dollop of butter is mixed in before serving.  This served over fresh tagliatelle made with lots of egg for a rich flavor and tender bite, is one of my favourite tastes.

Osteria Bottega – this tiny charming spot (20 seats) is close to the university.  If they are serving lasagna (bolognese layered with fresh spinach pasta and beschamel) – get it.  It was “troppo caldo” outside for lasagna making when I was there in April – but I hit the jackpot in November.  The mom is in and out of the kitchen – and she is adorable.  They hardly speak any English – and you can reserve (practice your Italian) – which I strongly suggest you do.

Ristorante da Nello al Montegrappa – when I first saw this place I was a little nervous thinking it would be touristy – but it was pouring rain and the city was packed so I went in. This deceptively large restaurant was completely jammed with locals and the food is amazing….so fantastic in fact I went back the next day for lunch.  (I had to have one more plate of bolognese before leaving town.) They welcomed me back and when I explained I was researching Bolognese sauce they said should have gone in in the morning to watch the chef make it……. when I went back again 6 months later they marveled that the Canadian was still “researching” Bolognese! 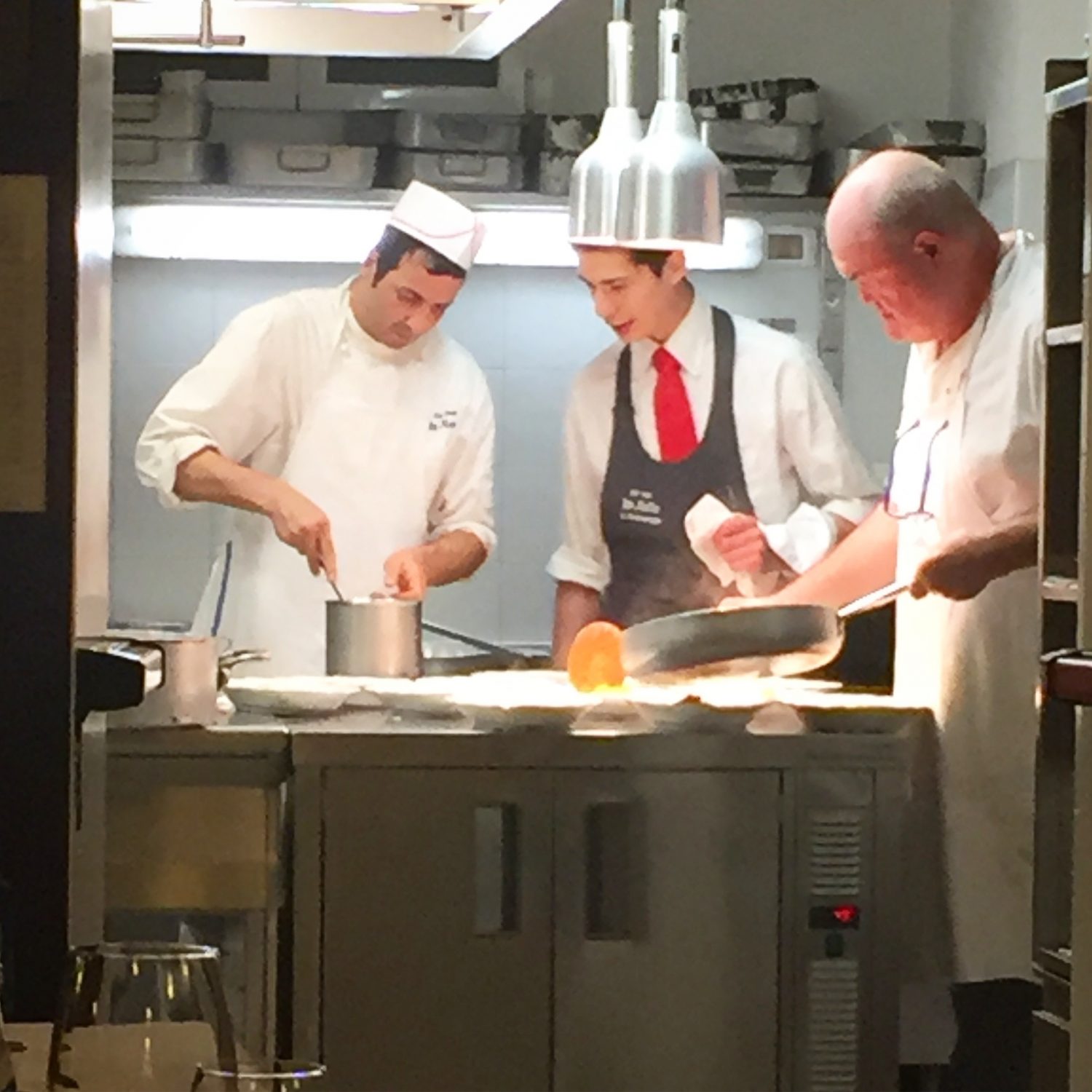 Don’t bring any vegans with you.  (Do you know any actual vegans?)

And bring your walking shoes…you’re going to discover meal after delicious meal why Bologna is referred to as “La Grassa” (The fat one) – so you are absolutely going to want to walk up the 666 porticos (4km) to the stunning view from the beautiful Santuario di Madonna di San Luca…..every morning….right after breakfast but before lunch. 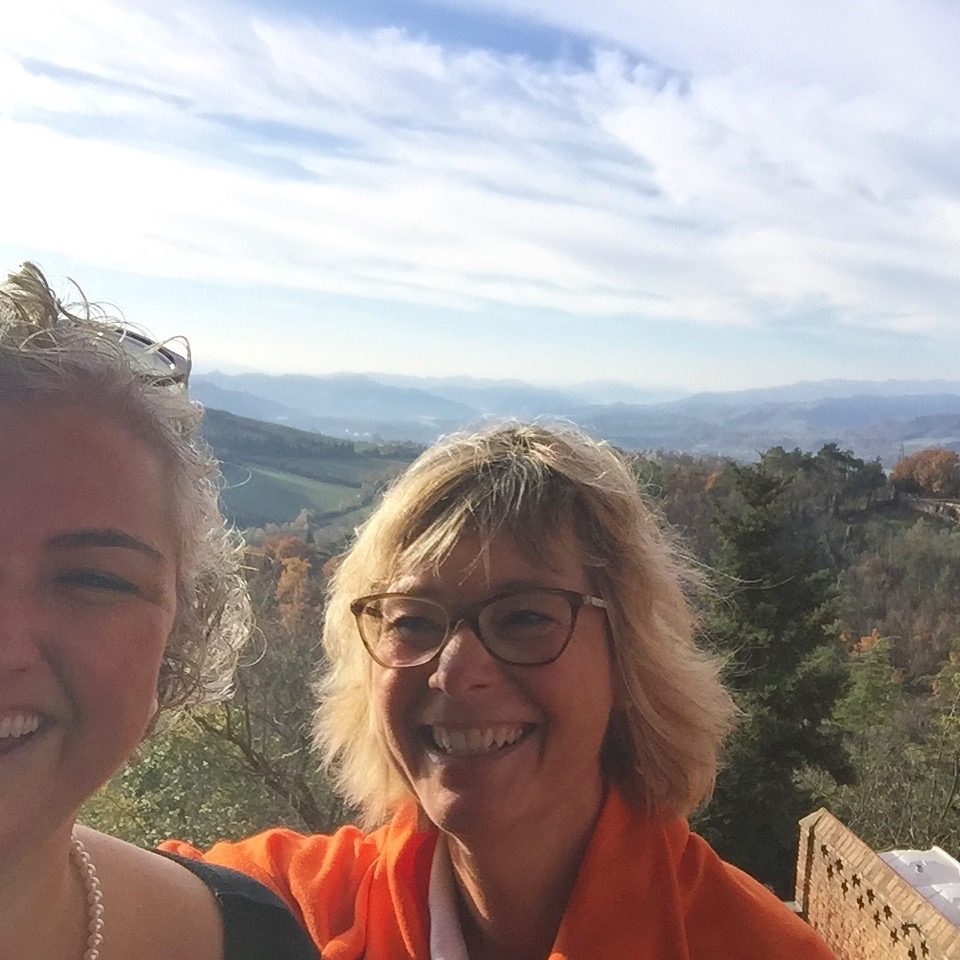