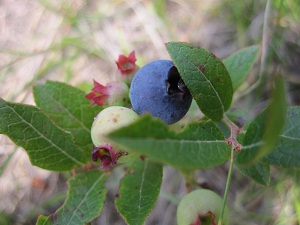 When I woke up this morning, I just had a feeling they were out there.  Waiting for me.  Maybe it was last night’s dessert…. I fear we may have had the last of this year’s amazing Ontario strawberries.  Maybe I was hopeful that with strawberries on their way out, blueberries were surely on their way in.  I hopped out of bed, grabbed a quick cup of coffee, packed up a little breakfast and headed out.

The lake was calm.  The sun was shining.  Not a soul to be seen on the lake.  Charlie stood with front paws on the bow of the boat, ears flapping in the wind as we rode over to the island.  I pulled the motor up (awakening a LARGE dock spider the size of my hand), and pulled the tin boat up onto the rocks.  There was nowhere to tie my line, so I wrapped it around a wild juniper bush – I hear they can be quite strong.

We headed immediately for our family’s (not so) “secret” blueberry patch, walking past hundreds of bushes not yet bearing fruit.  Charlie was way ahead – he knows the drill.  I was not concerned – “our” patch would be brimming with berries – I just knew it.

Before settling on this lake, I often dreamed of picking enough wild blueberries to make an entire pie.  We used to pick blueberries and get enough for one single solitary pancake – I thought my goal was nothing but a pipe dream.  That was before this lake.  This island.  This miraculous patch.  This magical piece of land where Cam, the kids and I once picked enough berries for an entire pie AND a batch of muffins in under an hour.  I am not telling a lie.  That first summer on this lake the blueberry gods smiled down on us, and we feasted for close to four weeks on pies, pancakes, muffins and ice cream all made with the tiny juicy berries.  I knew I had found my dream cottage.

Charlie came charging back to me before I got to our patch.  I should have known something was up.  Charlie is quite the blueberry picker.  You always know you’ve hit upon a bush that he got to first as the leaves are wet and slimy, and there’s not a single ripe blueberry to be found.  He likes to lie down while blueberry picking – never one to over-tax himself – he eats all the berries (only the ripe ones) that surround him before picking himself up and moving on to the next set of bushes.

Turns out he came back to find me because there were no berries to be found.  We covered the entire patch three times, searching – on hands and knees (me – not him) – just to be sure – sometimes they can hide under the leaves.  No blueberries.  Well, one or two, sort of sad ones.  Some bushes looked like they had been scorched by last week’s heat; others were bare, while still others had the tiniest of berries, still white – not yet ripe.

We headed back to the rocks and had breakfast – ironically some blueberry yogurt.  Charlie licked the pot clean – compensation I guess for lack of real berries.  We looked at our tin cup with barely a dozen blue dots in it, and decided they were not worth taking back to the cottage, so Charlie and I shared them.  How can so much flavour be jammed into something half the size of a pea?  The sun was getting hot so we jumped into the lake to cool off.  I headed back to the boat, rather sad, empty cup in hand.  To be honest, I was feeling a little sorry for myself.  I had been certain today was the day; I’d just have to try my luck next week.

Then I spotted Charlie.  Lying down.  As I got closer I could hear him slurping.  My retriever that refuses to retrieve anything had finally sniffed out a patch of gorgeous, ripe berries for us.  He scorfed them back quickly and I tried to pick as fast as I could.  We were sort of racing each other – seeing who could get the most of the small perfect patch.  I managed to get half a cup – none of them slimy with Charlie slobber.  In the potentially blueberry rich weeks of July this was a paltry score, not enough  to make anything significant.  These ones could go in the freezer, as was tradition, to be sprinkled on pancakes on Christmas morning – when the cottage, the rocks, the water and the little tin boat seem so far away – they almost seem like a dream.  When you taste those pancakes on Christmas morning, made with the slim pickings of early July and of leftovers from making pies – you are magically transported for a second to summer.  Thanks Charlie.

It’s always a toss-up for me what to make with the fruits of picking:  pancakes, compote for sour cream ice cream, pie or muffins.  So many choices.  I like it best when there are enough berries around that you don’t have to choose.  If it were up to my friends and family though, they’d pick these muffins every single time.  It’s a recipe I’ve used forever and modified over the years.  Don’t use a mixer – make them by hand – they taste better!