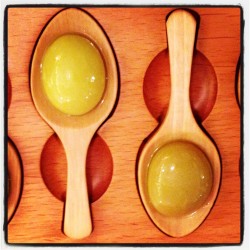 “Are you sure you want to go there?  It’s incredible, but not traditional.  They make, I don’t know how to say….things like mousse…..out of Jamon!  Just so you are prepared.”

My inside voice stomped her foot.

“OK, listen.  I really want to eat at an Adria restaurant.  I am here after all.  And when am I coming back?  And…..maybe, just maybe I might bump into Ferran.”

It was not the first time on our trip folks had tried to gently steer us away from either one of the Adria restaurants in Barcelona.

My outside voice smilingly said: “It will be an experience.  I’d just like to try it.”

Our Bodega connection smiled sympathetically and was now on the phone with them, chatting away in Spanish.

Inside voice lost it.

And voila just like that, we had a reservation to eat Jamon mousse or whatever non-traditional craziness goes on at Bodega 1900.

I will admit, part of me had a feeling that it was going to be a bit of a lunch box let-down.  So much hype.  Could it really be that good?  But the other part of me just had to see for herself.

It’s always best to be prepared for the worst-case scenario, so we strategically had a super-amazing seafood extravaganza for lunch at Cal Pep.  Clams with Jamon.  Tuna Tartar.  Langoustines. Calamari.  The to die for ruby red Gambots.

Bring on a bowl of air that tastes like smoked foie gras!  Serve me a single tiny fish coated in cotton candy!  Albert Adria I dare you to tease me with a single olive made of water and gelatin!  Cal Pep fed us well this afternoon, and we already know Lolita’s Taperia is around the corner in case we (gasp) risk hunger.

We were the first to arrive at Bodega.  An empty restaurant never feels quite right.  Its like getting to a party too early – and as 50% of the couple that is chronically punctual, I know the feeling all too well.

Bodega is tiny – the front has a single table for two, a bar and a couple of stools.  We were led through a short hallway to the back.  Our waitress, not happy with the table placement, asked us if we would mind going back to the front so she could re-arrange and she would come and get us.

Back in the hallway a man was coming the other way.  There is not room for two – and we did that thing where you both move right, then left, then right again – so you aren’t passing each other – you just look like you’re doing some weird dance.

Except, my heart was pounding, and my inside voice was screaming at the top of its lungs:

We finally passed each other.

I imagined he must be stopping in to say hello to his brother.  Maybe to check in on the Jamon mousse preparation.  It has to be made just so, you know.

In seconds, we were retrieved and brought back to our newly positioned table.

“A TABLE RIGHT NEXT TO WHERE FERRAN WAS SITTING!!!!!” 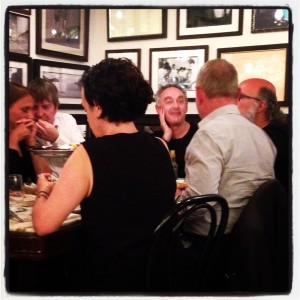 The place filled up instantly and Ferran was joined by 7 others – one of them streaming the Bayern Munich/Real Madrid game on his iPad.

Now with actual people in it – the place was casual and lively, and fun…. the low ceilings and close tables make it feel like you are at a party in the world’s-most-famous-chef’s-brother’s-basement….except its not a basement, or a party and

“FERRAN ADRIA IS LIKE 6 FEET AWAY DRINKING BEERS WITH HIS PALS!!!!!”

We ordered “What Ferran is having…” According to us, we are hilarious, Shelley and I.  According to the waitress, not so much.  I guess she’d heard that one before. Essentially if we would like, she explained, she would keep bringing us tapas until we surrender to satiety. No allergies, no aversions….bring it on.

Jumbo paper thin potato chips fried in olive oil – with a pepper sauce you doused on them. 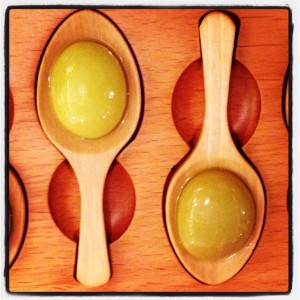 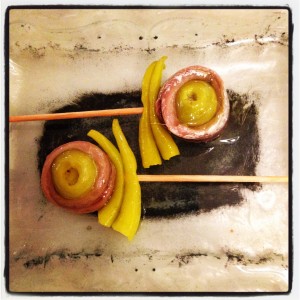 Streaming football guy switched places with one of the ladies, so all the boys could enjoy watching the game with their flavoured air. Except there was no flavoured air.  Or cotton candy coated fishlettes.  Or jamon mousse.  Only exquisitely delicious, gorgeously presented, tapas.

Mejillones  (mussels) and Navajas (Razor clams) each in their own escabeche 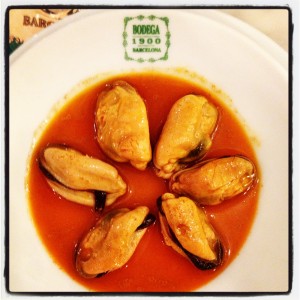 A waiter grabbed a guitar and the whole place started singing and clapping.  Click here for action video. 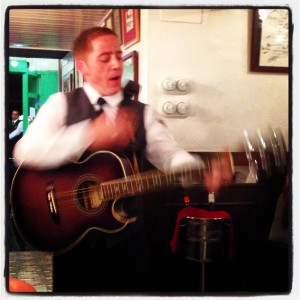 Only brother Albert and staff stopped at Ferran’s table – either nobody noticed him tucked away in the corner, or everyone respected his right to hang out with his amigos eating delicious food and watching the game. 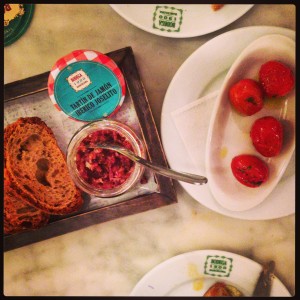 And…. Mollete de calamares – an odd yet delicious item which is among the most popular – mini hot dog bun stuffed with fried calamari 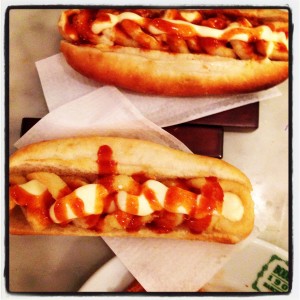 We waved a white napkin.  Basta.  Time to experience dessert.

Mango al natural – slices of perfectly ripe mango topped with chili and salt with a quenelle of mango ice cream. 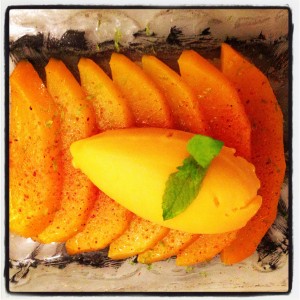 We sampled a couple of local dessert wines too, because, we were after all, at a kind of party – Real Madrid had just beaten the pants off Bayern Munich in a 4-0 game.

Ferran’s table was still going strong, when we inevitably but sadly reached food and wine saturation.  I found myself almost wishing for flavoured air.

Outside , I stopped to take a picture of the sign – and there was Ferran – he had stepped away from the table and was in the front room.  I snapped a couple of pics. 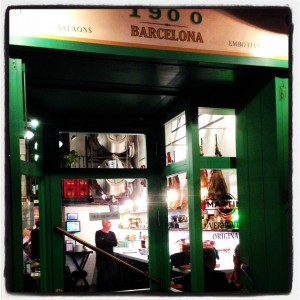 “BYE FERRAN!  GRACIAS! THAT LIVED UP TO ALL MY DREAMS AND MORE!” I called in my outside voice……when I knew there was no way he could hear me.