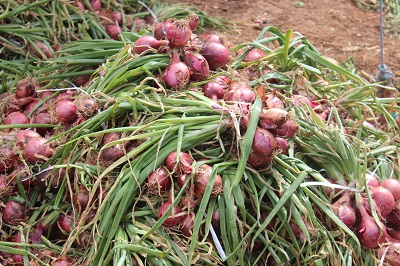 Lahcen asked us if we would like to venture out of Fez into the mountains to see the weekly Berber market held outside Azrou.  South we drove, away from the ancient medina, past endless groves of olives and apples, fields of onions and squash, and bushes buckling under the weight of ripe prickly pears.  Into the Middle Atlas region of Morocco, Lahcen skillfully delivered us to Azrou despite questionable customs around passing lanes, adherence to speed limits, and the interesting parade of vehicles – some more like bikes than even motorcycles, some vans piled high with livestock on the roof and children atop the livestock – waving at those who dared to pass.

This region where Lahcen grew up is mostly Berber – with a rich farming history and tradition of nomadic lifestyle – herders following their flocks as they graze.  Each Tuesday the community gathers at the edge of a field, or at least what appears to be a field, for one of the most amazing markets I have ever seen.

Parking at the edge of said field requires nerves of steel, an ability to gesture emphatically with your hands, no inhibitions around honking your horn, and a willing passenger (in this case Paul) to move obstacles (like rocks) to carve out a small slice of land on which to leave your vehicle.

Maria, Kat and Dana donned their headscarves, in hopes of fitting in – although, in my opinion the iPads as cameras were somewhat of a dead giveaway that we were not ourselves nomadic sheep herders.

A gorgeous sunny day, the market was a cacophony of sounds, colours and delicious smells.

Yellow melons the colour of the sun.  Red onions a glorious deep purple.  Mountains of fresh mint.  Okra tied beautifully into tiny bunches.  Fresh Absinthe by the bunch.  All laid out mostly on the ground, with farmers often lying amongst their harvest.

At each stall, most items were weighed using old fashioned scales, and what appeared to be rocks denoting a unit of measure.  A man strolled up and down the aisles with his baked goods – as bakery on wheels of sorts.

There were stalls with (Berber) barbers – giving shaves and haircuts.

Stalls specializing in eggs, or olives, or rustic clay tagines, or clothing, or portable stoves, or hanging sides of raw meat ready to be carved and grilled in front of your eyes.  One guy was selling tiny little sausages, grilled over an open fire then placed into a flat bread before being doused with sauce.  (Paul and I couldn’t resist – and despite heckles from our fellow travelers – lived to tell the tale)

Everything you could possibly need – or want was available at the market.  So unlike anywhere I have ever been – a language I did not know, produce I had never seen before…

Lahcen stopped at several stands selling dates.  He examined the quality, asking questions, opening boxes, tasting, until he found a seller who met his exacting standards.  He bought a box – probably close to 5lbs of dates, opened it up, and encouraged us to taste.  Sweet, sticky, soft – perfect.  Each time Lahcen stopped at a stall or saw someone he knew – he offered up a date.

Ingredients for that evening’s cooking lesson were on the shopping list – plus anything that looked good or took our fancy.  “Maria!  You want some plums?”  “Kat – choose us some eggplant…”  Lahcen encouraged us to pick out the produce – to touch it, to smell it – to pick the perfect piece from the bunch – he was there coaching us – giving us tips – ensuring we picked the best.

I took the box of dates from Lahcen – he was trying to juggle it and our ever growing basket of produce.  “What are all these for any way?”  I was trying to imagine what was on the menu that would use so many dates.

I wasn’t really sure I understood.

“Do you want me to hand these out?”

Lahcen looked at me.

I don’t think either of us were overly confident that the lovely farmers of the Middle Atlas were going to take dates from such a strange stranger.  One who did not speak a single word of their language.  But I was willing to try.  A smile is international – and contagious – isn’t it?

It was not easy at first.  Lahcen and the others had wondered off – distracted by some golden pomegranates.  I found myself in the middle of this market, in the middle of a field, with a large sticky box of dates in my hands.

I headed over to a stall where a man was selling something that looked like a cross between a pumpkin and a humungous butternut squash.  He was a fairly stern looking fellow.  Or maybe he was just looking at me sternly.

I held out the box.

He looked at me.  Not sure what to make of me, and shook his head, no.

“Come on!  So delicious!”  I moved the box closer to his reach.

He reached out tentatively, and ever so gently plucked a date from the box.  As soon as he put it in his mouth, he smiled.  A shy smile.  A can’t-help-but-smile-smile.  Go eat a date – and try not to smile.  Its not possible.  It’s candy made by mother nature.

He gestured for another.  Success!  2 dates given away – probably only 989 to go.

At the next stall, I could not persuade the gentleman selling potatoes to have a date.  I moved along, noticing a group selling sunshine coloured mellons  eying my box.  They were not shy at all – they each took a date or two – and smiled and spoke to me like I actually knew what they were saying.

I felt a tap on my shoulder.  A mother with a young child strapped to her back gingerly took a date, passed it over her shoulder to a waiting hand and gingerly went for another for herself.

Soon I was surrounded by date lovers and smile seekers.  People were calling to each other and waving over friends.  There was no pushing, no crowding, just folks keen to have a small sweet treat – and in return give me back some of the best smiles I have seen in my life.

I wandered into the livestock area of the market and caught up with the group, handing out my last few dates.  Here there were lots of herdsman with their sheep waiting for the end of the day when selling would begin in earnest.  You don’t want to buy too early and risk paying too high a price.

Lahcen inspected a lamb – gently pulled back its lips – looked at its teeth – lifted its tail – inspected its…well, you know.  He patted the animal and exchanged words with its owner.  “Sometimes I bring people here – we buy an animal – we take it into the forest where we butcher it and cook it over a fire and then camp out amongst the Barbary apes.”  Huh.  Was pretty pleased that was not part of the itinerary.  Handing out dates I can do – but that my friend is just over the top.

We headed back to the car with all of our goodies.  “Everybody happy?”  called out Lahcen – he was always asking us this – making sure we were ok.  “Maria – you happy?”  (Everyone always wants to make sure Maria is happy….)

And happy we were.  And hungry.  We set off for Azrou for Moroccan BBQ (that’s a whole other delicious story….)  As we passed the last stall a guy selling plastic bags stopped Lahcen and pointed to me smiling –  “He says you are the lady that gave everyone dates!”  Yup that’s me – so if you go to the Berber market outside of Azrou – the one at the edge of the field – buy a box of dates and tell them I sent you – then bask in the glory of all those gorgeous smiles you get in return for handing out a little sweet treat.

Lahcen Beqqi runs Fes Cooking.  He was our host for the week and took fantastic care of us.  He is an outstanding cook, a great teacher – and apparently will take you camping in the mountains or in the desert if staying in Fes is too cushy for you.  If you are considering a trip to Morocco and love great food, be sure to check out Lahcen’s website and drop him an email.  www.fescooking.com