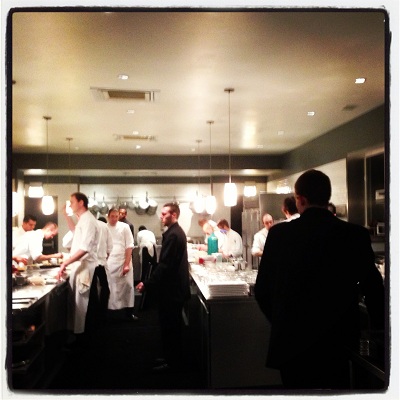 Two of our dining partners got stuck in a meeting and were late leaving the office.  Naturally it was pouring rain and not surprisingly there was an accident on the I90 into Chicago.

I called Alinea to advise we would be late.  They were polite, but clearly unimpressed.

“We have until 7:20 to get there – or else a large gaping whole opens in the earth and swallows us and our paid reservation with it.”  Blair texted our friends being held hostage at the office.

This could turn out to be the most expensive dinner I never ate.

Number 7 Best Restaurant in the World.  Touted my many to be the best meal of their life.  That’s a pretty bold statement.

Getting ‘tickets’ to a meal here must be strategized.  I had been trying to get in for over a year.  This time, my plan was to catch a last minute table release on Facebook.   I checked every 5 minutes looking for an opening.  I even had the draft email in my outbox all ready to go – credit card deets and everything – all I had to do was press send as soon as they declared a table available.

I had resigned myself to yet another Alinea-less evening, when late in the afternoon an opening appeared on FB.  As I hit send on the email my heart sank with nervous anticipation.  I was not kept in gastronomic limbo too long….in a few moments there as response.  I had our table for 4 for 7:00pm.  They had swiftly charged my credit card for each of us, plus tax and gratuity.  The sommelier would ‘meet‘ with us upon arrival to discuss our beverage choices.

Ever want something so bad and then when you get it you’re not sure if you want it?  Yep – that was me.  Would it be as mind blowing as everyone says it is?  Would it be contrived, and full of staff that take themselves way too seriously?  Would it be the best meal….ever?

Alinea was finally within our grasp, we could not be foiled by traffic.  Thankfully we were in the hands of Amir – super cabbie, who pulled some tricks the Chicago police force would either be totally impressed with or arrest him for.  Miraculously, we pulled up at the front door at precisely 7:00pm, made it past the bouncer and through the dimly lit, haunted house reminiscent fresh flower and marshmallow filled entryway to the restaurant.  Yes.  Fresh flower and marshmallow filled entryway.  What else were you expecting?

After having a look into the immaculate and near silent kitchen – a brigade of over 20 chefs and cooks, and one incredibly vigorous floor sweeper – we were led to our table – munching on our passion fruit and coriander marshmallows.  We met with the sommelier, and decided to go for the wine pairings – what the hell – our meal was practically a mortgage payment – you couldn’t drink Chicago tap with that.  We were ready to indulge.  Bring it on!

Delighted with a Osestra caviar spoon with geleed clarified butter.

Educated on how to poach our Onago snapper, and ‘grill’ our own scallop on molten river rocks.

Teased with the tiniest single bite of hot and cold potato with black truffle.

Reduced to licking our plates clean of artichoke, eggplant and octopus course.

Challenged to follow the rules when presented with duck 5 ways with 60 un-named condiments – we were only supposed to match one condiment to each type of duck – but the whole thing turned into a cross between culinary tetrus and gastronomic trivial pursuit.

Entertained by green apple helium balloons, and what they can do to your voice and your hair (and I was reminded why it’s always best to be behind the camera).

Returned to our childhood playing with food with dark chocolate bomb and chestnut ‘ice cream’ that was ‘plated’ directly onto the table.

I know I am missing a few courses.  But you get the idea.  It was enchanting.

It was probably the most expensive dinner I actually ate, but worth every penny.

It was not one of my favorite meals of all time.  Of course it was amazing – its Alinea after all.  But as someone at our table sagely said – “It’s food for your brain – not for your heart.”

Lobsters in Maine.  A bowl of linguini with clams in Verona.  Pizza from our woodburning oven under the stars at the cottage.  Bacon butty at Borough Market in London.  A really fresh fried egg on toast.

Simple food.  Delicious food.  Rustic food.  These are the kinds of meals that are my favourites – these are foods I crave.

Alinea is not that.  Nor, I think is it trying to be.  Alinea is trying to stretch the imagination.  I mean really – how do they dream up candy helium balloons complete with flavoured helium?  They want to challenge you.  Make you think, appreciate, debate.  And that’s a super cool thing if you can snag a table, have room on your credit card, and can make it to the restaurant on time without the earth opening up and swallowing you and your reservation.

On the way out – we grabbed as many passion fruit and coriander marshmallows as we could.  They don’t travel well in a purse – for future reference.

Next post:
When is a pizza not a pizza?